The people with whom we now shared the apartment were an interesting lot.  Naturally, there was Ferdi, as well as his best friend, Max Fingerhut and his nephew Norbert.  There were also a few others whose names and faces I’ve completely forgotten.

The reason I remember Norbert is that he was a boy my own age who became a good friend, especially  while we lived in hiding in the “couvent.”

And of course, there were Fella Flamberg and her mother, Bertha, my mother’s best friend during the war years.  Bertha was not really her first name, but it served.  Fella and her mother had been passengers on the St. Louis.  For those who don’t know, the St. Louis was a German passenger liner that left Bremen with 937 German Jewish refugees for Cuba and the USA.  The ship was not allowed to drop off its passengers, either in Cuba or the US, and so the sympathetic captain had to turn the ship around and offered to try to drop the passengers off in England.  England also didn’t want them and so all returned to Europe, either to the Netherlands or Belgium.  Few of them survived the war.  The movie, ” Voyage of the Damned” (available on DVD)  is their story.  If you want confirmation of all this, you can Google the passenger list of the St. Louis, and you’ll find both Fella and her mother. 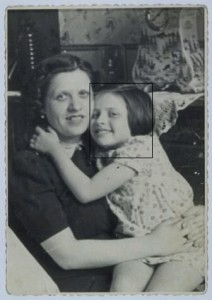 Fela Flamberg and her mother "Bertha"

In any case Mike, Fella’s father, had left for Cuba several months before, and the rest of his family was supposed to meet him in Cuba.  As Fella and her mother couldn’t get off the ship, this didn’t happen until after the war when they were reunited in the US.

But Fella, while we were in Belgium, was my very favorite buddy, although she was a couple of years older than I.  What I remember most clearly of our time in that apartment was the two of us collaborating on writing letters, and posting them at the local mailbox, although neither one of us knew how to read or write.  Later, Fella also joined me at the Couvent St. Joseph.